Gen. Lucky Irabor, Chief of Defence Staff (CDS), has explained why the Nigerian army is finding it tough to combat robbers and Boko Haram.

He said this during a dinner honoring personnel from the Senior Course 43 of Command and Staff College Jaji in Kaduna on Wednesday.

The CDS outlined that the government did not train the soldiers to fight asymmetric warfare.

He however disclosed that they have created new techniques and abilities to ensure that Nigeria is save.

“Our involvement in containing asymmetric security threats in the past few years has highlighted the need to acquire new operational capability of the Armed Forces of Nigeria to deal with emergent threats.”

“As you are aware, asymmetric warfare encourages the use of non-traditional military tactics, for which our previous training and operational doctrines were not well suited.”

“Accordingly, we are developing new capabilities in intelligence and surveillance, which are critical for staying ahead of terrorists and insurgents, and other criminal elements in the society” 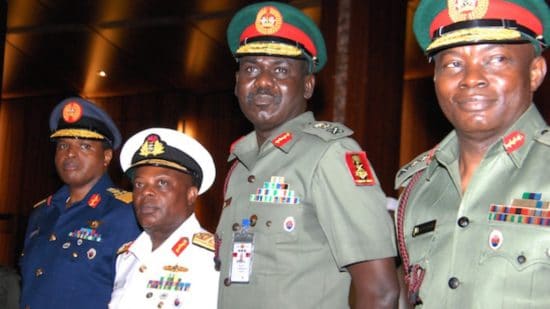